From Canada’s capital city of Ottawa to the “Hit Recording Capital of the World” in Muscle Shoals, Alabama everything changed in 2018 for the fast-rising eclectic quartet of Canadian ‘Americana-Rockers’. With a sound that’s hard to peg, but familiar nonetheless, the band are commonly marked as having a ‘fresh vibe – vintage sound’, nostalgic yet entirely their own; touching on sounds where acts such as The Eagles, The Loving Spoonful, The Beatles and even the late Tom Petty left off. Their sound and style span decades from the clean, warm pop ballads of the early 1960’s to the gritty rock of the mid 1970’s modernized by the bands own musical era; alternative rock of the mid 1990’s-early 2000’s.

Established in late 2013, Tribe Royal is a refreshing take on classic sounds, paying tribute to their own roots and hitting the stage in overdrive with an energy reminiscent of the Red Hot Chili Peppers. Comprised of the singer/songwriting partnership of Chris Kerwin & Terry O’Brien, two writer’s moored in different, yet complimentary sounds and styles; solidified by the rhythmic tandem of Bram Al-Najjar & Matt Robillard, ‘The Tribe’ as they call themselves, has quickly grown from four members to the burgeoning international following they’ve begun to enjoy today. The band has toured across Canada several times, played hundreds of shows at some of the most notorious venues in the country and opened for established or rising artists in: Sam Roberts Band, Ocean Alley, Quiet Company, Red Wanting Blue and Neon Dreams, to name a few.

In early 2018 Tribe Royal signed with esteemed Canadian Industry legend, Sandy Graham’s Music Management/Marketing label, Entertainment Music Group, out of Toronto Canada and things swiftly fell into place. They were signed to Dead Frog Records, a label based in Sweden, for European representation and are enjoying FM airplay in Sweden and Portugal.

In April of 2018, Tribe Royal traveled to Muscle Shoals Alabama to work with legendary producer, Norbert Putnam, famous for recording notable artists such as: Linda Ronstadt, Jimmy Buffet, Dan Fogelberg, Mickey Newbury, to record two new singles “Holding On” & “Good To Me” for a vintage Double-A-Side titled “Road To Muscle Shoals”, released internationally on July 1st, 2018. In September of 2018, Tribe Royal travelled to Orebro Sweden for their first run of international performances at Live At Heart Festival where they captured the hearts of an enthusiastic and abundant Swedish audience. Strong performances in Sweden lead the band to be booked for the inaugural year of Live At Heart Newfoundland, at Westway Lab Festival in Portugal and Canadian Music Week 2019.

2019 has shown itself to be another very exciting year for Tribe Royal, with several marquee international performances already booked: Summerfest (USA), at Cashbox Canada’s Showcase at Morrison’s Pub at MIDEM (France), in New Orleans and Atlanta, Live At Heart Sweden with more still to be announced, the fast-rising Tribe Royal handily proves that exhilarating diversity does still exist in contemporary rock.

You just need to know where to look. 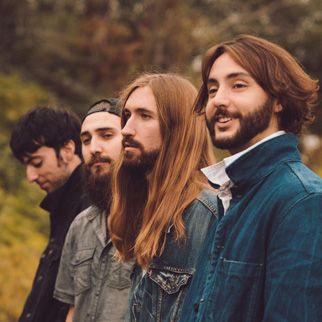