Born and raised in (Montreal) Canada.
Singer , songwriter and guitarst.
In the 60’s Rick’s first instrument was playing Drums
In the 70’s Rick later moved on to play guitar and songwriting
Rick has played in many bands thru the years including Fussy Cussy.

Also sang the title track “Oh Susanna” in a motion picture with Tony curtis and Louis Gosett Jr. “It Rained All Night the Day I Left”.

In the 80’s Rick built his own recording studio where most of the original hit songs, along with a vast catalog of cover songs, ranging from Elvis to Foreigner.

Rick has a unique vocal tone and timber to his voice, very touching and draws you close to the human vibe. As Rick once stated in an interview: “It’s what I call , dat dem der feelings” that we liked the best. Songs are mostly about true life in this real world here on earth.

Since 2011 Rick was signed to a record deal with Dance Plant Records. With the successes of his previous CD’s such as “Planit”, “Lucid”, “RB King”, & “Ricky Bee” which can be previewed or purchased on line at various websites such as iTunes, Amazon.com, Spotify to name a few.

Rick Barrucco’s “Brand New show”, is in the genre of pure and true classic rock

In 2016 the extra ordinary releases of another cover CD of great artist and another of CD of original songs will be released. We look forward to these releases soon on all digital platforms. 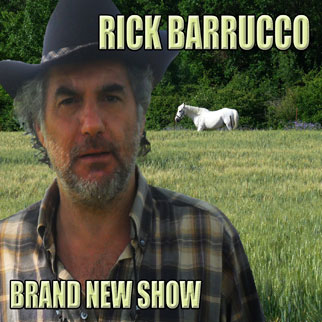