Katerina Fedosejeva simply known by her state name Katerina, is a Russian singer born in Soviet Union. She is the third child, having a sister and brother.

Music always played in her family’s house from the first day of her life. From early childhood Katerina was a spectator in many classical concerts where her sister performed. Day by day she felt the love of music, listening to any kind of music, from simple TV concerts, and piano playing. Music was around almost all the time. First Katerina’s voice was heard by her teacher in 1st grade, telling her parents that their daughter has a good voice and should sing.

Katerina started to sing first in school choir and after a short time began to perform as solo singer n school events. When she became 8 years old, she asked her parents to bring her to musical school for studying. From this moment during 7 years, she studied at musical school in parallel with the gymnasium school. At 9 years old, she made her own girl musical group together with 3 friends from her neighborhood, performing songs of Spice Girls for their neighbors. Even if it was a children game for their age, Katerina took her leadership role very seriously organizing everything for her band, from choreography, design of the costumes or inviting the neighbors to their concerts.

After she finished the musical school, Katerina realized that the most important thing that she wants is to become a famous singer, so she decided at the age of 15 to go to classical singing school at Musical College in parallel with Mathematic high school. She started also to take private vocal lessons for pop, jazz, soul, folk styles, realizing that if she wants to become a famous singer, she needs to diversify her musical culture and stylistic repertoire.

After high school, she attended the Business University, during which at the age of 21, Katerina becomes a member of a musical group as a prize after winning a major musical contest in Riga. For two years, starting with this moment, Katerina sang in this group in more than 300 concerts, her vocal repertoire consisting of famous hits from classical music, pop, soul, dance, jazz, etc. Over the years, Katerina performed on various international stages from different musical styles like; “Diva Dance Aria” from the movie “The 5th Element”, “Non je ne regretted rien” Edith Piaf, and “And I am telling you” Jennifer Hudson, “Listen” Beyonce, etc.

In 2012, in one pop music festival, she met her manager Ernest Hadrian Bohm. He was impressed by her voice and beauty, while she was singing “One Moment in Time” of Whitney Houston, proposing her to build a solo dance music project for her. In 2013 Katerina signed the contract with Mango Records Production house, managed by Mihai Gruia and Sorin Brotnei, at this point the stage name Katerina was born.

After signing the contract, Katerina started to worked hard in the studio and prepaired for her debut as solo singer. For the first video was chosen the song “Blackboard” produced by HaHaHa Production and Michael Traore recorded in two different versions, English and Russian. The shooting of the “Blackboard” video directed by Anthony Icuagu started at the beginning of 2014 which was released in March 31, 2014 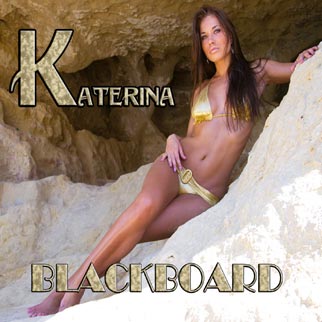