Kitty Galore has been singing and songwriting since they were eight years old.

After a short stint in an all-girl punk group, Maxi Rad, Kitty left Edmonton and ended up in Halifax, where their first official band, The Catalysts, were formed.

For a year, The Catalysts played local shows, opened for several touring acts, and released a full-length, self-produced album.

Now, upon returning to Edmonton, Kitty is ready to move into a deeper, poppier sound. While continuing remote releases with The Catalysts, Kitty Galore has taken a confident step into the dark pop world with their solo single, Arm Candy. It has received many accolades from listeners since its release on October 31.

Kitty’s thoughts on moving from Punk to Pop:

“Punk will always have a place in my heart. No matter what music I play, I’m sure my punk roots will be evident from my energetic stage show. All the same, I want to focus on music that connects to an audience melodically and lyrically. Plus, I want to take better care of my voice!”

They credit a majority of inspiration to powerhouses such as Babygirl, Washington, Santigold, Icona Pop, and Natalia Kills 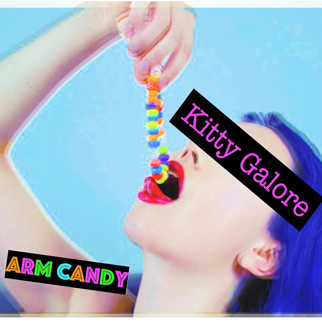